Russia steps up Ukraine assaults ahead of Victory Day parades

ZAPORIZHZHIA, Ukraine: Ukraine hoped to evacuate more civilians from a besieged Mariupol steel plant on Saturday as Russian forces unleased new bombardments across the country ahead of Victory Day festivities in Moscow.

The Azovstal steel mill is the last pocket of Ukrainian resistance in the devastated port city and its fate has taken on a symbolic value in the broader battle unleashed by Russia’s invasion.

Ukraine’s defence minister said Russian forces had resumed their assault on the site, despite earlier talk of a truce to allow trapped civilians to flee the complex. 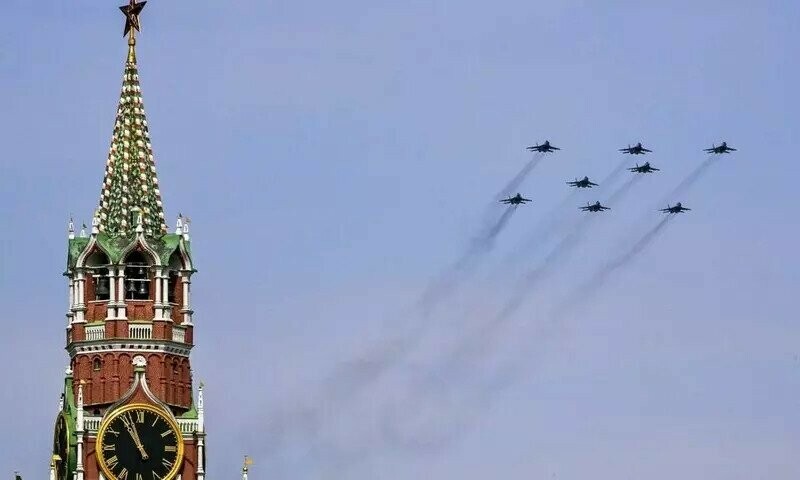 The Ukrainian rescue service said a missile hit a technical college in Kostiantynivka, in the eastern region of Donetsk, causing a fire and at least two deaths.

Donetsk regional governor Pavlo Kyrylenko said there had been “massive bombardments” along the frontline. Strikes were also reported in the north of Ukraine near the city of Kharkiv and in the southern city of Mikoleyev, a key Russian target.

Ukrainian forces have launched a counter-offensive of their own.

According to the defence ministry, Russian forces were forced to demolish three road bridges near Tsyrkuny and Ruski Tyshky outside Kharkiv, to slow the Ukrainian advance.

According to British intelligence, Ukrainian forces equipped with high-end weaponry by the western allies, have been able to destroy at least one of Russia’s most advanced tanks, the T-90M.

“The conflict in Ukraine is taking a heavy toll on some of Russia’s most capable units and most advanced capabilities,” UK Defence Intelligence said.

“It will take considerable time and expense for Russia to reconstitute its armed forces following this conflict,” it said, warning sanctions on advanced components would make it harder for Russia to re-arm.

The west, meanwhile, is stepping up arms deliveries to Ukraine’s defenders.

US President Joe Biden on Friday announced another package of military assistance worth $150 million, including counter-artillery radars used for detecting the source of enemy fire.

This brings the total value of US weaponry sent to Ukraine since the Russian invasion began to $3.8 billion.

Biden had urged Congress to approve a further $33 billion package, including $20 billion in military aid, “to strengthen Ukraine on the battlefield and at the negotiating table.”

The G7 leaders, including Biden, and Ukraine’s President Volodymyr Zelensky are to meet in videoconference on Sunday to discuss Western support for Kyiv.

On Friday, Zelensky said “diplomatic options” were also under way to rescue Ukrainian soldiers from the Mariupol steelworks, as civilian evacuations continued.

The Russian defence ministry said 50 people were evacuated from the site, including 11 children.

It added they were handed over to the UN and Red Cross, which are assisting in the operation, and that the “humanitarian operation” would continue on Saturday.

About 200 civilians, including children, are thought to be trapped in the tunnels and bunkers beneath Azovstal, along with Ukrainian soldiers making their last stand.

Russia announced a day-time ceasefire at the plant for three days starting Thursday but the Ukrainian army said Russian “assault operations” had continued by ground and air.

Ukraine’s Azov battalion, leading the defence at Azovstal, said one Ukrainian fighter had been killed and six wounded when Russian forces opened fire during an attempt to evacuate people by car.

Since failing to take Kyiv early on in the war, Russia has refocused its offensive on the south and east of Ukraine.

Taking full control of Mariupol would allow Moscow to create a land bridge between the Crimean peninsula, which it annexed in 2014, and separatist, pro-Russian regions in the east.

In those regions, separatists said they had removed Ukrainian and English language traffic signs for Mariupol and replaced them with Russian ones.

Locals want to see proof that “Russia has come back here forever,” said Denis Pushilin, head of the breakaway region of Donetsk.

In neighbouring Lugansk, Ukrainian officials said on Friday that Russian forces had almost encircled Severodonetsk – the easternmost city still held by Kyiv – and are trying to storm it.

Kherson in the south remains the only significant city Russia has managed to capture since the war began.

A senior official from the Russian parliament visiting the city on Friday also emphasised that Russia would remain in southern Ukraine “forever”.

“There should be no doubt about this. There will be no return to the past,” Andrey Turchak said.

As European countries have sought to clamp down on Russian assets overseas, Italian authorities impounded a mega yacht as speculation swirled it might even belong to the Russian president.

“Scheherazade” is worth an estimated $700 million. Financial police have been able to “establish significant economic and business links” between the owner and “eminent people in the Russian government”.

Researchers at the anti-corruption foundation of Russian dissident Alexei Navalny have linked the yacht to Putin.

In tit-for-tat, PTI vows action against PML-N in Punjab after Gill’s arrest

Youm-e-Ashur being observed today with due solemnity

Sri Lanka raises electricity tariffs by up to 264pc

All of Karachi’s local government UC maps in one place

Doubt and disbelief in Kabul over Al-Qaeda chief’s ‘assassination’

In tit-for-tat, PTI vows action against PML-N in Punjab after Gill’s arrest

Youm-e-Ashur being observed today with due solemnity