The impossibly fantastic life and death of Aamir Liaquat

In an interrogation scene from Quentin Tarantino’s Reservoir Dogs, one of the lead characters cuts off his victim’s ear while the 70s classic “Stuck In the Middle With You” plays. The jokey twangy music amplifies the horror of the unfolding gore. You cannot look away. The mind skittles between discomfort and morbid fascination.

This is what it was like to behold Aamir Liaquat, the mercurial televangelist who conquered Pakistan’s Ramazan transmissions for years amid a bizarre political career with the MQM. Liaquat died on Thursday, his body found at home in circumstances that opened up the kind of bizarre speculation that accompanies the deaths of controversial celebrities.

Yet given the trajectory of his life, it all seems to have come full circle. With Aamir Liaquat it was all or nothing—he was a man of the People and against the People. He was a honey-tongued Aalim one moment and a potty-mouthed menace the next. He sang like an angel during Ramazan TV shows and spewed projectile vomit on Twitter the next. He talked peace but waged war.

As Maximus says in Gladiator: Are you not entertained?

Indeed, Aamir Liaquat was always entertaining. Pakistan had never seen anyone like him. He was, whether you loved him or hated him, impossible to ignore. No fictional script can rival his real-life exploits. The Kardashians would have trouble keeping up with him.

The incredible impact Aamir Liaquat had on the public imagination in the last 20 years cannot be underestimated. He operated at the intersection of three powerful arenas: Media, Religion, and Politics. He was not just a manifestation of the malaise at the heart of all three institutions but also the embodiment of their glory. Few have had the verve to conquer all three but Aamir Liaquat did—and moulded them to his will.

This was certainly the case in the early 2000s when his ascent began. Pakistan’s television had gone through its biggest revolution in decades. The privatisation of the media opened the public to new ways of seeing Pakistan and the world. An aspirational class began to emerge, wanting more than the Khabarnamas, or sanitized dramas, or the PG-friendly music shows. People yearned for something different, something more, something exciting and captivating.

This vacuum needed to be filled. And Aamir Liaquat fit. For it fulfilled his biggest need: Absolute Attention.

The impact was galactic. He pioneered televangelism, paving the way for acceptance of a religious sex symbol. He was charismatic and awami, he may not have been the most learned scholar (or according to his fake degree, not learned or a scholar), but he connected with his audience. His programme Aalim Online was a standard-bearer of religious infotainment. That, along with his Ramazan transmissions, transformed television during the holy month. Every year’s ‘Inam-e-Ramazan’ programming provided spectacle. It made Liaquat into a man of the millions.

The format set the precedent for religious infotainment being less ‘info’ and more ‘tainment’. Actors and actresses became part of these broadcasts. Who needed religious knowledge when you could have games, quizzes, cooking, in the holy month minus the holy part?

In a regular world Aamir Liaquat would be shunned as an opportunistic ‘lota’ but no matter the controversy, his stature with the masses remained intact

Aamir Liaquat relished moving effortlessly across worlds, becoming the most popular game show host since Tariq Aziz, and then using his influence to host a current affairs show, where he took his brand of populist polemics to political commentary. If there was ever an Alex Jones-style figure in Pakistan, Aamir Liaquat was it.

After television, the natural progression was to politics as a heftier vehicle for his aspirations. He rode the MQM wave during the height of its power in the early 2000s, until he became too big for even Altaf Hussain, and had to be taken down a peg. Eventually Altaf’s own foibles caught up with him, and sensing the changing tides, Aamir Liaquat rapidly switched to the PTI bandwagon before the 2018 elections, remaining one of its most steadfast and volatile members. That went on until the 2022 No-Confidence Vote, when Aamir Liaquat once again jumped ship, becoming one of Imran Khan’s most vociferous critics.

In a regular world Aamir Liaquat would be shunned as an opportunistic ‘lota’ but no matter the controversy, his stature with the masses remained intact. 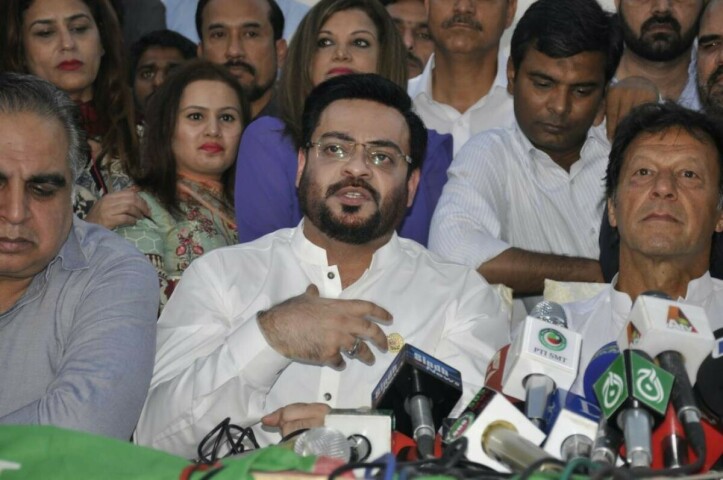 And controversies there were many, too many to count. At times they bordered on the nonsensical; he blamed the defeat of the Pakistan team on the green color of the soles of their shoes. Other times he flirted with social ethics by giving away orphaned babies on air. He enacted suicide on his show. He did the Naagan snake dance.

With such influence at his disposal, he used Islam to court polemic and radicalized views, never hesitating to whip out the blasphemy card. He rode the wave of populist anger saying Salman Rushdie deserved to die for his blasphemous statements, which cost Aamir Liaquat his National Assembly seat and ministerial role. He defended the Lal Masjid insurrection, saying the government was “backsliding on the Shariah” and “lewd” signboards. He incited violence against the Ahmadiyya community by calling them blasphemers who were wajib-ul-qatl or liable to be killed. Indeed, this statement resulted in the murders of two Ahmadis. Aamir Liaquat even went on a rampage against activist Jibran Nasir for what he said was being an Indian agent and a blasphemer.

And yet, he rarely took responsibility for his actions, or he did with half-hearted apologies. All the while, he claimed he was an entertainer first, and a responsible citizen second, or third, or never. Nothing could dent his popularity. A leaked video of him making rape jokes, cursing and behaving inappropriately was filed away as dubbed. Like Donald Trump or Khadim Hussain Rizvi, Aamir Liaquat emerged as the kind of firebrand whose uncouth nature wasn’t a weakness but an endearing quality. And it emboldened others to do the same, becoming a pseudo progenitor of what we now know as the social media troll.

Social media provided Liaquat with the opportunity to become even more ubiquitous. His Twitter and Instagram feeds publicized his personal life, a soap opera on its own: First marriage, followed by a messy divorce and the exposure of tragic remarks from his daughter on Twitter; a second wife who was working with him on his Ramazan transmission. Then another public fallout, also revealed on Twitter, followed by another messy divorce, and then an unexpected marriage to a teenager from Southern Punjab, who was active on TikTok.

Aamir did what he did best: become the victim and the aggressor simultaneously. He said he was finally broken, and wanted to leave Pakistan. But was this yet another plea for attention? Was Aamir really just being Aamir or was this serious? He had been pronounced dead many times before so was the news of his body being found at home also a publicity stunt?

Alas, it wasn’t. And even in death, Aamir Liaquat continued to fuel controversy. Rumors swirl around the circumstances and causes of his death. The truth may never come to light, which may be fitting. Aamir Liaquat was many things, but never for too long, before he became many more.

Usman Azeem is an Islamabad-based journalist and commentator. He tweets @zafarsmu